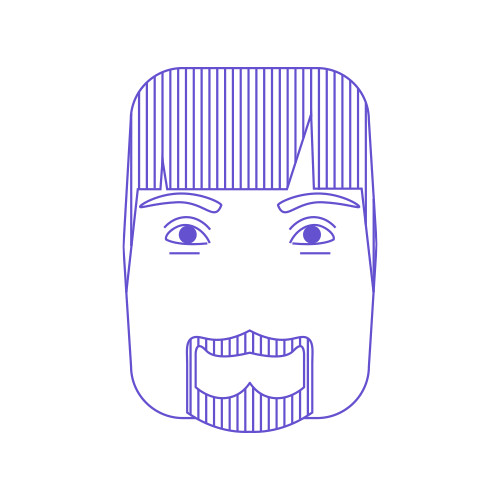 Although it is commonplace in many organizations, the minimum viable product (MVP) only celebrated its 20th birthday in 2021. The concept was born out of the need for businesses to test hypotheses and learn about product ideas quickly rather than waiting for a full launch.

Some reports suggest that as many as 95% of new consumer products fail out of 30,000 launched annually. The statistics paint quite a bleak picture for any business that believes they have the next big idea. Launching a new product is a high-risk venture, and organizations need to find ways to give themselves the best chance of survival.

Most products tend to fail due to a lack of research into the target audience, a performance that doesn't live up to customer expectations, limited consumer education about why they need the product, poor pricing strategy, or a weak marketing campaign. The MVP is designed to eliminate these common problems.

This article discusses what an MVP is, the best practices for development, what to look for in technology and why you should be using Ruby on Rails as your platform of choice.

What is an MVP, and why it's best practice to develop a product?

When people talk about a minimum viable product (MVP), it is a product management strategy that aims to deliver a product to market with the least amount of effort in the shortest possible time. The objective is to infiltrate a market as soon as possible to gather validated learning. 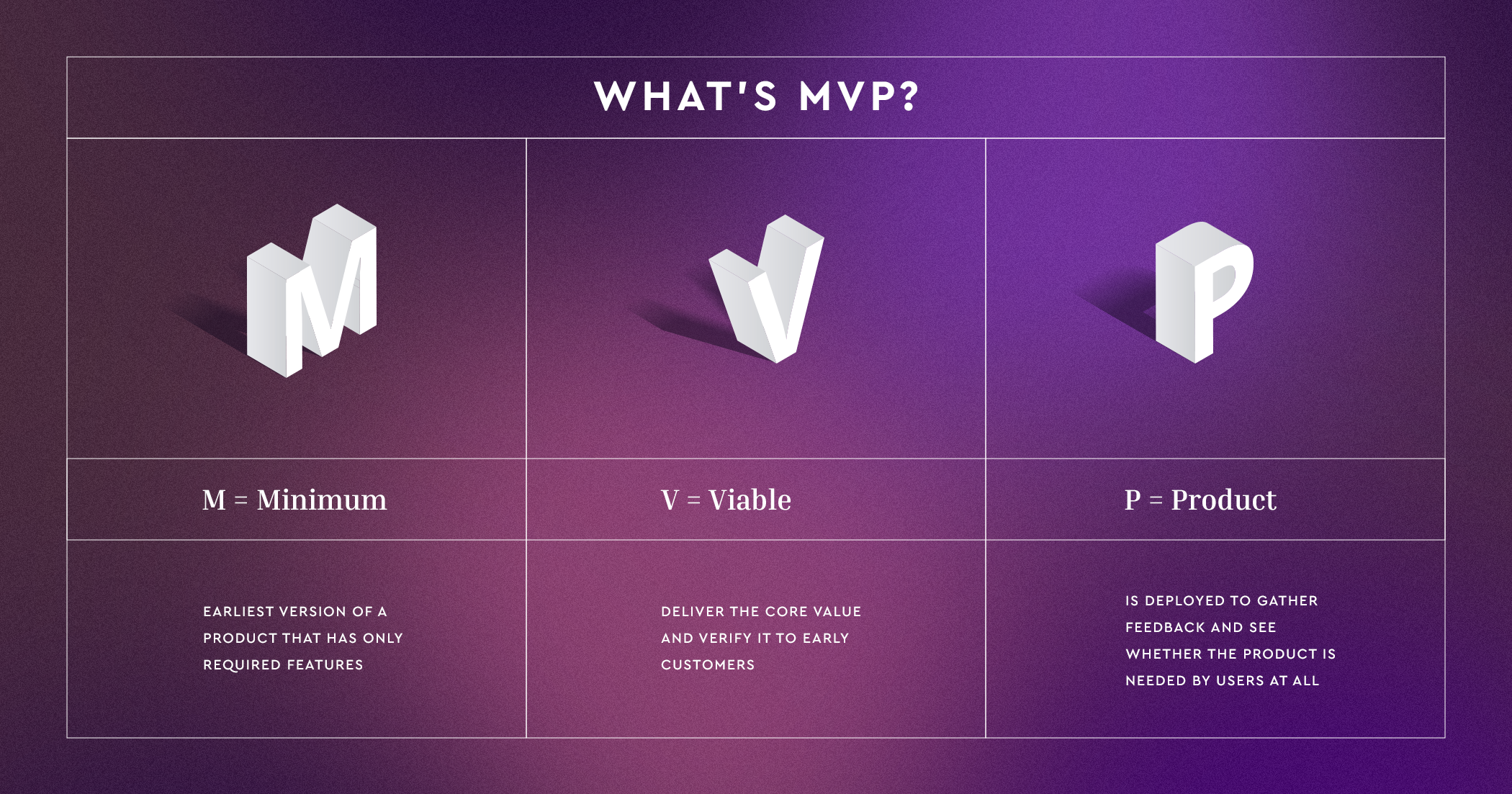 The MVP launch should solve the core customer problem and demonstrate how the product adds value to their lives. It is a bit like a precursor to a formal beta test, which is usually implemented following the learning from an MVP basic functionality.

Many of the most popular services we use today have evolved from MVP propositions. Facebook, Twitter, Netflix and Amazon all began with basic versions of their service before becoming what we know today. After gaining market knowledge from its DVD rental service, Netflix noticed a market shift to digital channels and built an MVP for existing customers. Over time, the solution has developed and become far more elegant and stylish.

There are three core benefits to developing an MVP.

1. It prevents time-wasting on a product that nobody wants
Imagine developing a mobile app but don't want to launch it until it has everything that users might want. However, once you launch, you find that they don't want or use a lot of the functionality. An MVP that provides the basic foundation for the app could save time and money before looking to role out other features.

2. Users get to experience the product quickly
As soon as you launch a product, you don't know how people will use it. For example, Bubble Wrap was initially designed to be a new style of textured wallpaper rather than something to protect items during transit. If you get to market quickly, you may find a more intuitive way to educate consumers about the product or even an entirely different target audience.

3. Prove or disprove your hypothesis
Ultimately, an MVP helps to prove or disprove if your product idea is going to work. If it's the latter, at least you haven't amassed huge costs from the project and have the opportunity to pivot your strategy.
When developing an MVP, as we've already said, you still need to follow best practices to at least ensure you release something that works with the capacity to provide valuable learns. The best practices include:

One of the most critical factors to consider when developing an MVP is the technology stack.

What to look for when choosing MVP technology

The technology stack includes all the tools, languages, frameworks, and other components required to build an MVP. The choices you make can directly impact the user experience and the performance of your product. The final product development is typically dependent on the tech stack you use for the MVP, so it's essential to make some considerations even at this early stage.

Open Source Resources
Many of the languages for development are open source, with a large community and free resources, frameworks, and libraries. Using these open source tools provides the opportunity for cost-effective development, with the availability of existing code that you can reuse without reinventing the wheel. For example, using Ruby, you can quickly develop an MVP by reusing existing code and ready-made libraries. Understanding the best language to use is critical to success, so it's important to do sufficient research.

Scalability and Maintenance
At the beginning of the MVP process, it isn't easy to know how soon you will need to scale your product. For example, if the initial phase shows that there is a more extensive application load than anticipated, preparation for scaling up might need to happen sooner than you think. The language that you have chosen should also be conducive to growth. If you did opt for Python and the product is memory intensive, you might need to re-think your choice.
For maintenance, you should try to choose a robust technology stack that a standard developer can understand.

Industry Standards
Although you don't necessarily have to use the same languages and framework as others in your industry, doing so might help you understand what developers see as the most advantageous tech stack. If everyone is using a specific language, they are likely doing so for a reason, and the safest bet might be to follow their lead.

Time and Budget
When developing an MVP, the budget is directly proportional to time. Time is related to the number of features that you are looking to add to your MVP. If the foundation requires lots of different features, it will take longer to build them. For example, will the MVP be available across multiple platforms (web, mobile, hybrid, iOS, Android) and will each have all the available features?

The objective is to build the MVP quickly, and you need to select the technology stack that allows you to do that. Budgets might dictate what tech stacks is available to you but note that settling for something which isn't adequate could impact the long-term future of the product when looking to scale up.

Why use Ruby on Rails to build your MVP

Ruby on Rails is an open-source software used by Shopify, Airbnb, Twitch, and Zendesk, amongst others. It is typically a framework for building websites and works with its own programming language, Ruby. The platform is made for fast programming, to create products high performing products quickly. Moreover, Ruby on Rails is registered under the MIT license, keeping it open source and ensuring you don't have to worry about licensing fees.

Unlike other open-source software options, Ruby on Rails has excellent documentation and support features and integrates with the most popular databases and web servers. When building an MVP, fast development, low cost, and limited bugs make Ruby on Rails a top priority for your tech stack.

1. Ruby on Rails development culture
There are two beneficial features of the Ruby on Rails development culture. First, following the "DRY" principle, the framework offers a mechanism for reusing program code. The concept allows for a flexible and highly maintainable project. When code is not duplicated in several places, it's easier to test as you only need to review a single function rather than many of them. The DRY principle ensures the decomposition of complex algorithms into far more simple processes. Everyone can understand the code, reducing the development and testing time.

Second, Ruby on Rails prioritizes convention over configuration. As a default, the platform uses configuration conventions that are typical across most applications. Creating new applications is far easier given that specifying the configuration is only required in a non-standard case. Programmers need to make fewer decisions as there is no need to configure all the rules.

2. Sustainable technology development
Ruby on Rails has been around for 17 years but peaked between 2015 and 2017. New updates, fixes and releases come to market every month for the Ruby on Rails framework. Rails 6.1.4.1 was released most recently. There is a large community of skilled Ruby on Rails developers, with around 4,000 contributing on GitHub. The majority of updates come from developer requirements when they are working on specific tasks. 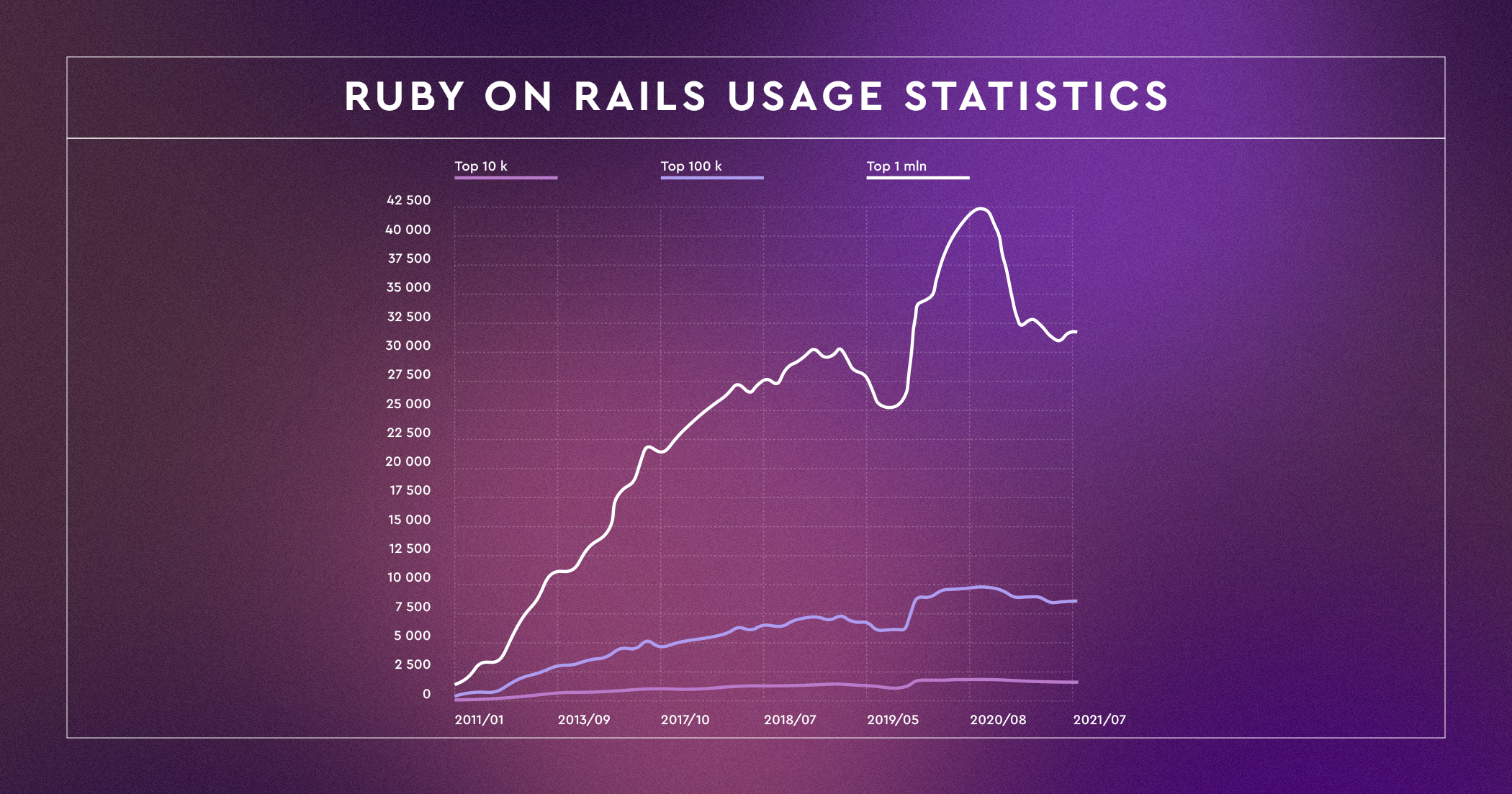 3. Fast prototyping
With Ruby on Rails, users can create modules and functionalities incredibly quickly. The software was one of the first to use the Model-View-Controller (MVC) application component partitioning scheme, which is designed to speed up the development cycle, fix bugs quickly, and accelerate the implementation of business requirements into the project. 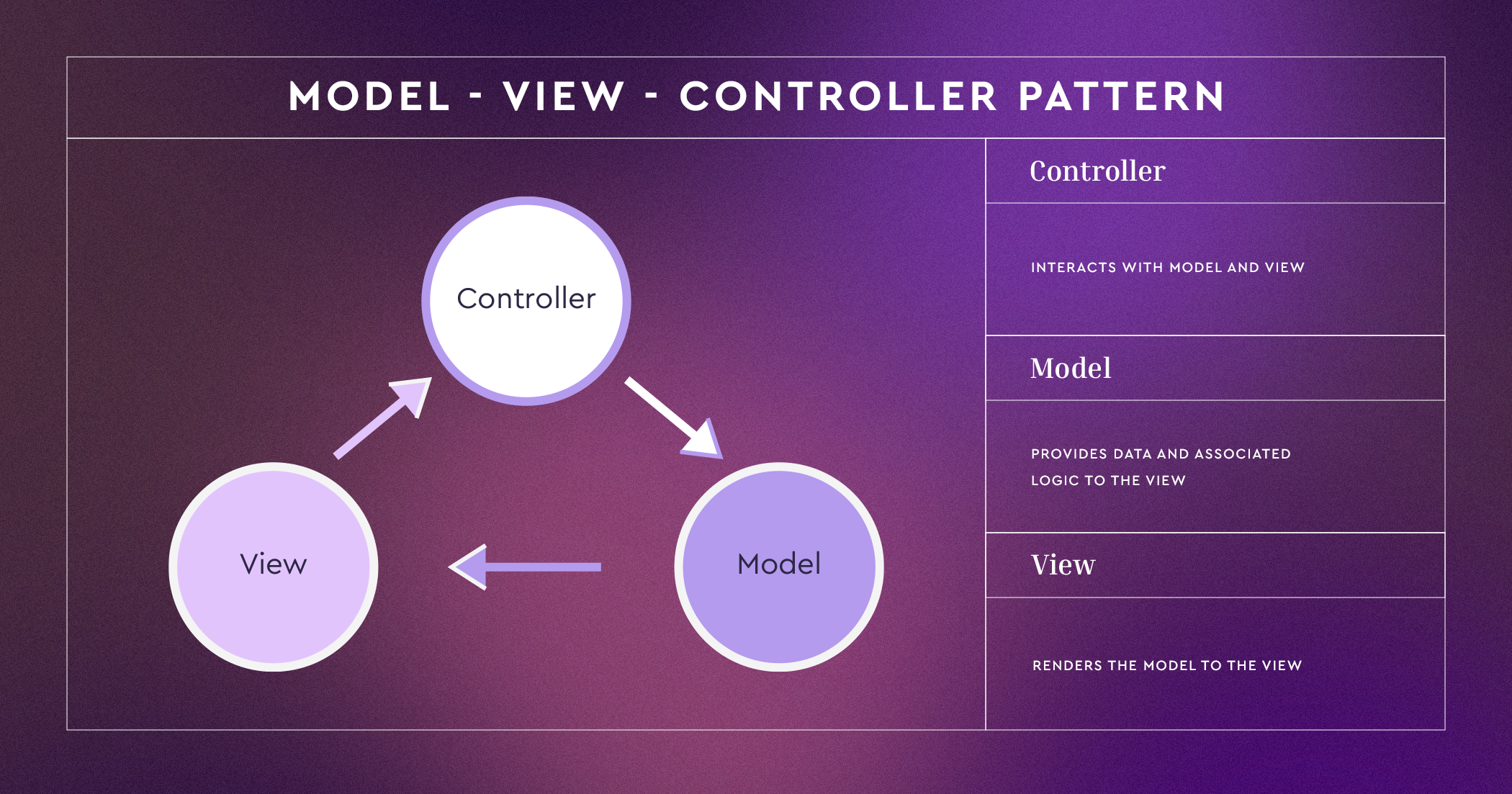 With this architecture, the pieces of code for your app work like building blocks.

4. Excellent ecosystem
There is a vast ecosystem of open-source plugins ("gems") with Ruby on Rails that implement the most in-demand functions. A gem can start at a low level, such as those responsible for part of the inner workings of an application, through to those that are entirely separate modules capable of handling a range of business functions. Ruby on Rails popularity is largely due to the excellent plugin system as it speeds up the development. Users know that libraries have been thoroughly tested and debugged over the years to ensure the reliability of solutions.

5. Security and Scalability
Ruby on Rails constantly releases security patches to keep the platform safe from cyber threats. Companies like GitHub and Twitter are using Ruby on Rails primarily because of the robust security and operational safety features. Ruby on Rails has proven stability with Object-Oriented Programming (OOP), support for multiple platforms (Windows, Linux, etc), and advanced framework compatibility such as AngularJS. The features make it one of the most scalable technology solutions, which is critical when developing an MVP.

6. Focus on quality
The ideology of Ruby on Rails involves using Test Driven Development (TDD), making any applications incredibly reliable. There are fully automated tools for integration and functional testing. An MVP can be developed with various tools and frameworks. However, if you want a stable, fast, and scalable solution, Ruby on Rails is the perfect addition to the technology stack. 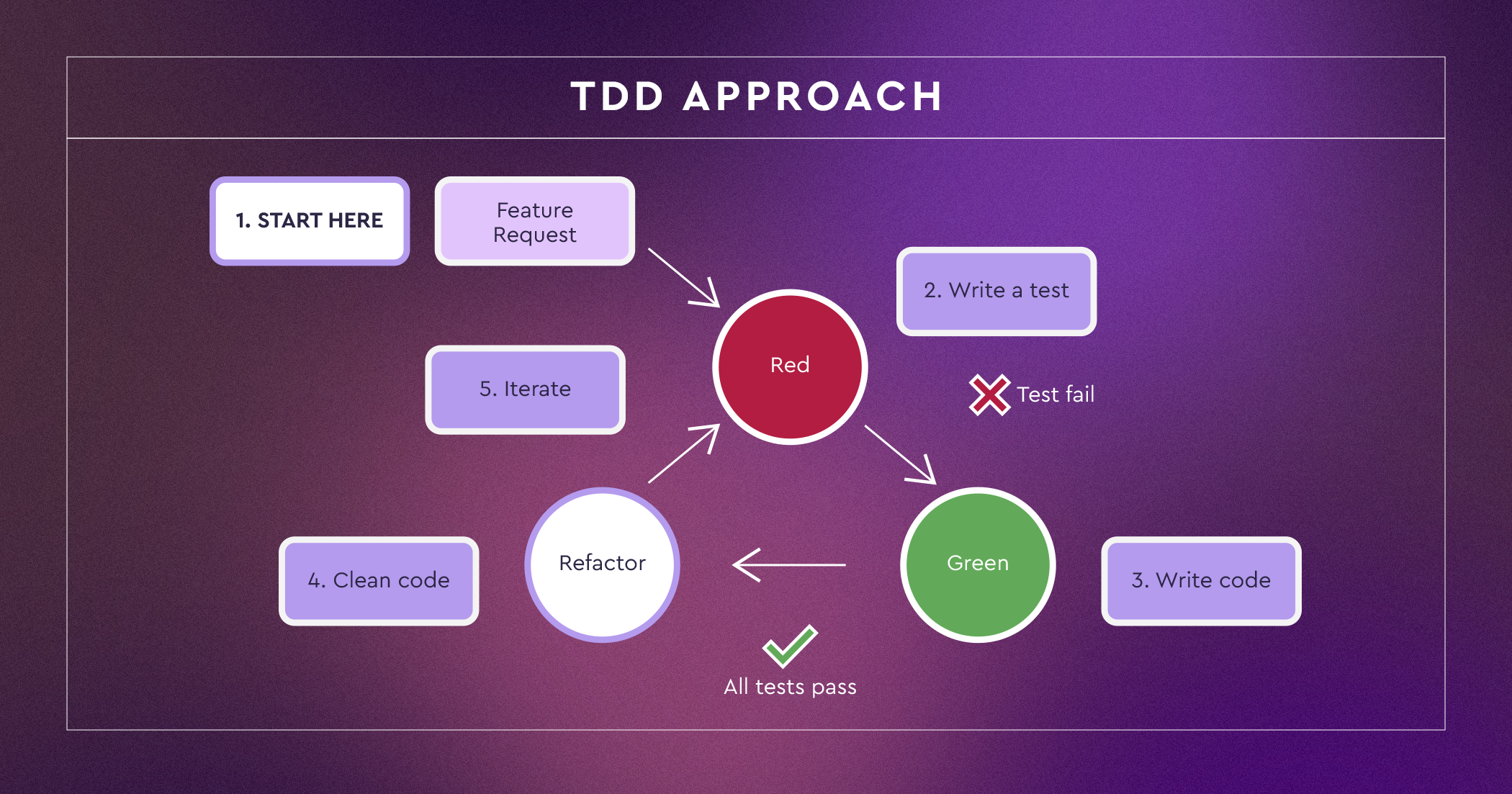 Creating an MVP is a pivotal part of product development to minimize the risk of failure. There are several considerations to make when planning your MVP strategy, and choosing the right technology must be a priority. While there are many options on the market, Ruby on Rails has features that perfectly align with the MVP development best practices.

If you'd like to learn more what projects Ruby on Rails suits best, read here "WHAT RUBY AND RAILS ARE USED FOR. TIPS FROM FULL-STACK DEVELOPERS TO NON-PROGRAMMERS".

Let's talk about it and understand which technology suits your business best.