What Do Experienced Developers Think of Ruby? The Ultimate Ruby Guide

In this article, you'll get an in-depth look into the Ruby programming language from experienced developers who use the language every day. We'll discuss its features, scope, perspectives, situation in the labor market, and what makes it unique among programming languages. So let's get into it.

About Ruby – The Highly Portable Language That Serves Many Purposes

This section will dive into everything you need to know about the flexible programming language in high demand in the marketplace.

The History of Ruby

I want the computer to be my servant, not my master, so I must be able to quickly and efficiently explain to it what to do."
Yukihiro Matsumoto

Ruby was invented in 1993 by Japanese computer scientist and software programmer Yukihiro Matsumoto. It's often called a language of "careful balance" because its creator took elements of his favorite programming languages (Eiffel, Ada, Perl, Smalltalk, and Lisp) to create a new and better language that makes programming more accessible. Matsumoto has likened Ruby to the human body - simple in appearance but complex on the inside.

Ultimately, Matsumoto's goal was to create a genuinely object-oriented, easy-to-use high-level language that people could easily read. So, while he wanted Ruby to be powerful and high functioning, his priority was a language that was understandable, used simple syntax, and facilitated short development times above all else. In other words, simplicity, and ease of use needed to take precedence over speed.

Ruby is massively popular in Japan and has been since the first public version went live in 1995. In fact, from 1995 to 2002, a whopping 20 books on Ruby were published in Japan. Whatsmore, Ruby became more popular than the US's preferred language, Python. But what about the rest of the world? When did everyone else start to notice Ruby?

The international community started to take an interest in Ruby in 1998 when its documentation was translated into English, and the first mailing lists were created. By 2000, Ruby was spreading worldwide, and English language books on Ruby were becoming readily available.

The next giant leap in interest happened in 2003 when 1.8.0 was launched and again in 2007 with the new framework version Ruby on Rails 2.0. These iterations pushed Ruby into the limelight for use in serious commercial projects. However, Ruby on Rails (RoR), a framework for developing web applications, was really the catalyst behind Ruby's success and the reason it's now recognized all around the world.

How Ruby Works and Its Features

Yukihiro Matsumoto, sometimes called Matz for short, created a set of rules that the language must follow. These rules are now called "The Ruby Way."

Matz also wanted the language to help programmers be more productive, allowing them to do more while putting in less effort. Ruby's features help achieve this goal in multiple ways.

In Ruby, the interpreter processes the source code at runtime and without precompilation. This provides platform independence and reduces the size of executable programs.

What Is Ruby For? Uses of the Ruby Programming Language

As a general-purpose programming language, Ruby is excellent at solving different problems across industries. As a result, you can see Ruby used in almost any industry for a wide variety of purposes. It's also used to write mobile games and applications for Android and iOS using Ruboto or RubyMotion. However, despite its broad appeal, Ruby does have a niche where it's used most often - web development.

Ruby works best when paired with its famous sibling, Ruby on Rails. When the language and the framework come together, you can create powerful and complex web applications and cloud software. Why? Combining the two allows you to create a site with a complex structure and dynamic pages and do so without learning SQL queries and working with databases.

Ruby and RoR are also loved by startups due to their unique ability to allow developers to deploy a prototype project in rapid time and instantly see its strengths and weaknesses.

You can learn more about where to use Ruby on Rails by reading our blog post on the topic here. 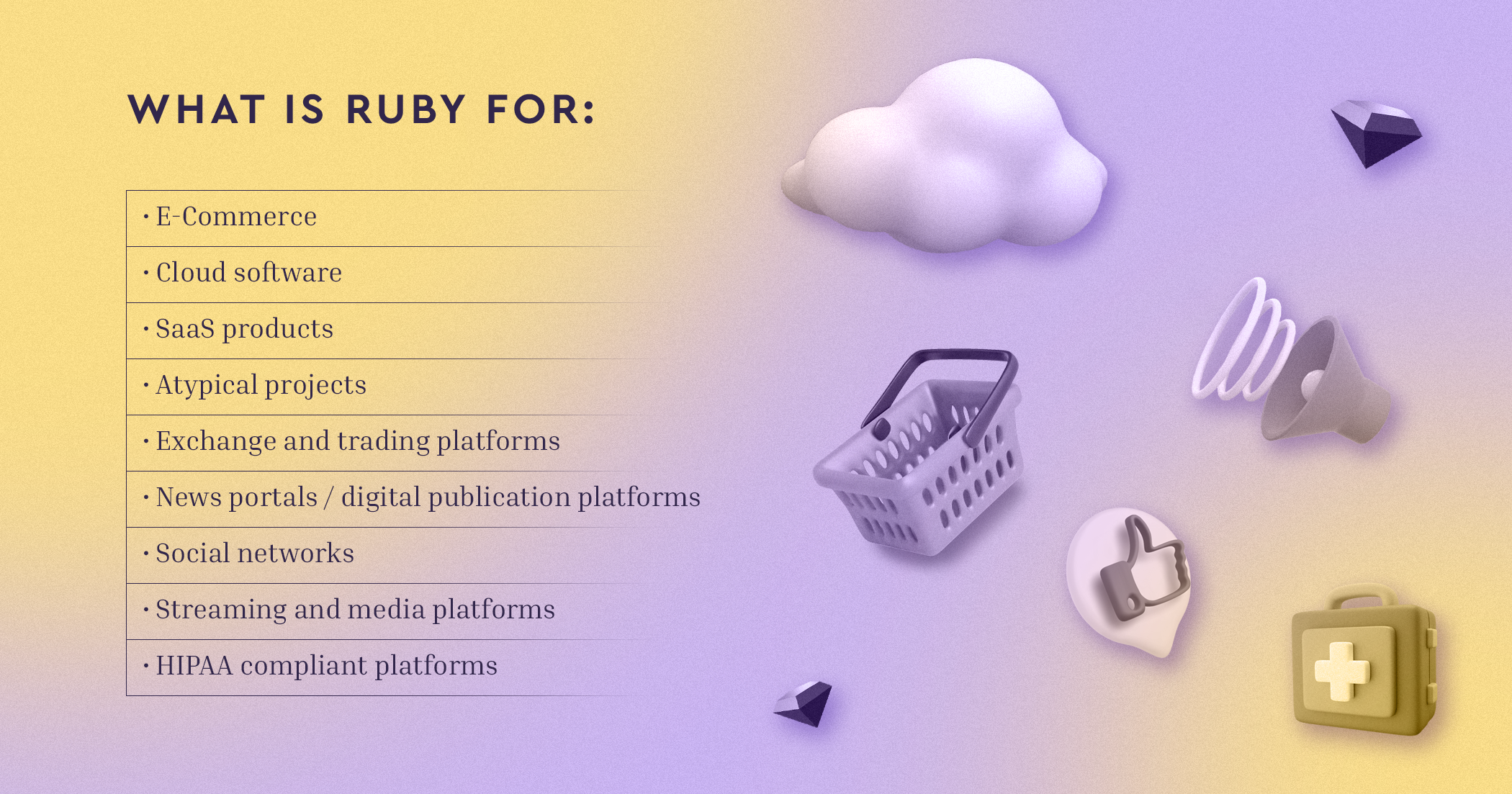 But who exactly uses Ruby? You've probably come across Ruby many times without realizing it. Here are some of the major projects that use Ruby:

Some other notable examples include Netflix, Instacart, Delivery Hero, Accenture, Redmine, Inkscape, SketchUp, and Bloomberg, among others.

So, now you know what Ruby is, how it works, and what it's used for. But what place does Ruby hold in the current business landscape? Answering this question can help us understand what role Ruby will play in the future of web applications and whether the programming language is a good choice for budding developers. Let's get into it.

To find where Ruby stacks up in terms of popularity, we can look in many different places.

Ruby is currently the 15th most popular programming language in the TIOBE index (the ratings are based on the number of skilled engineers worldwide, courses, and third-party vendors). This tells us that Ruby is a preferred language by many companies and has a loyal following.

According to The PYPL PopularitY of Programming Language Index, Ruby also ranks number 15 worldwide. This index is created by analyzing how often language tutorials are searched on Google - the more a language is searched, the more popular it's assumed to be. The idea behind this index is that search popularity can tell you which language to study or use in your next software project. 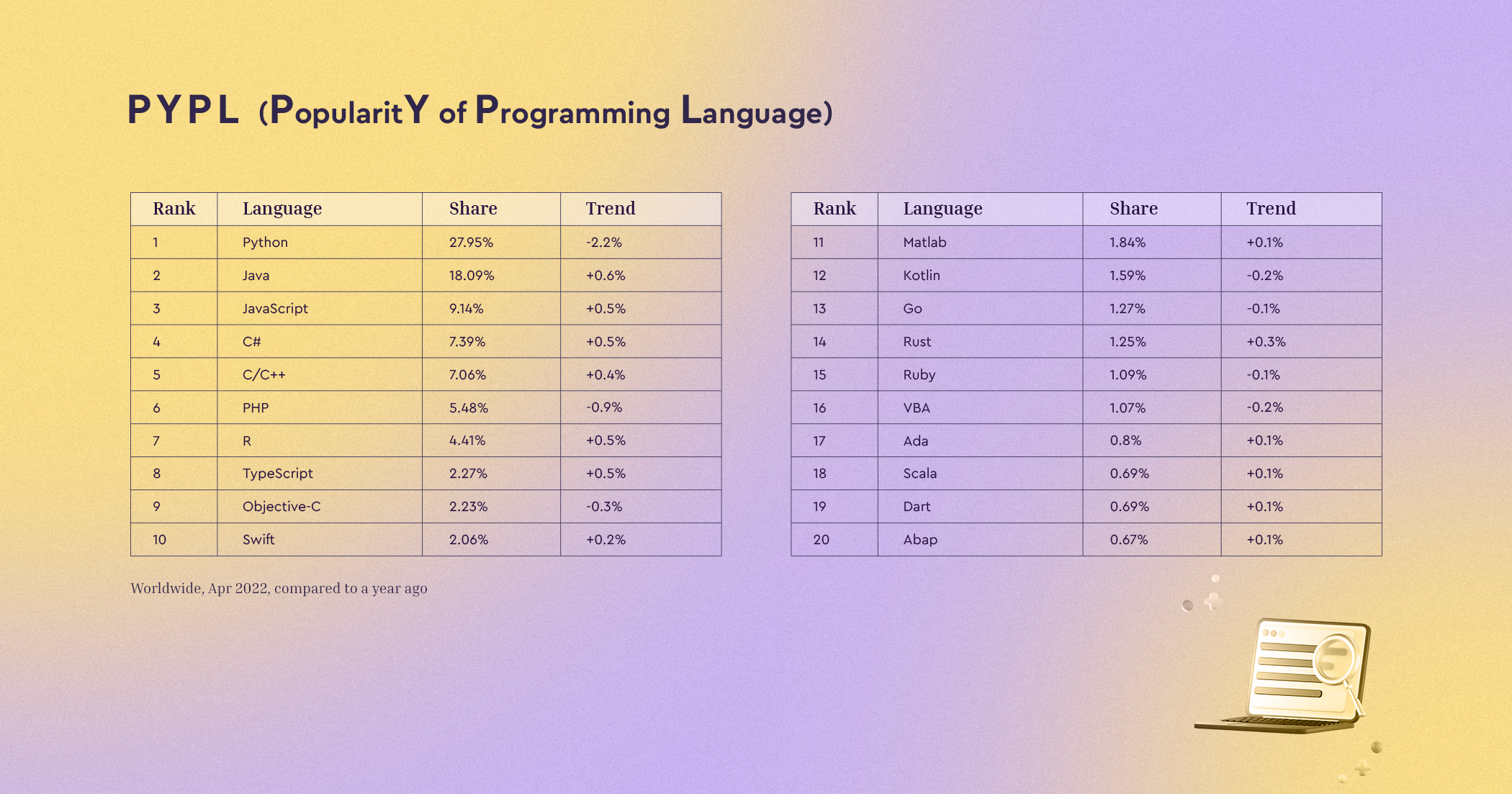 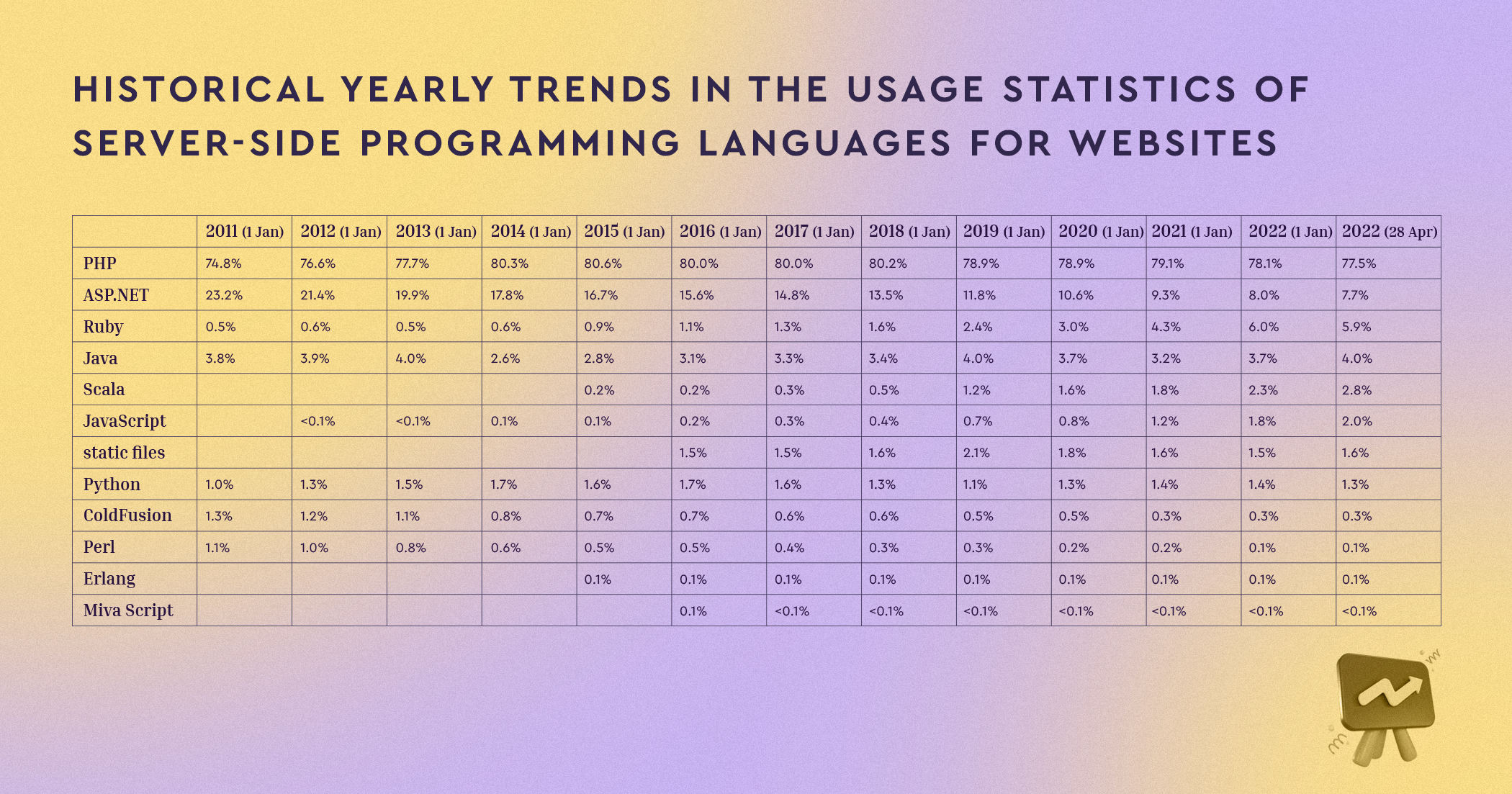 According to Stack Overflow's 2021 Developer survey with over 80,000 respondents, 6.75% of all developers and 7.89% of professional developers use Ruby.

Finally, let's take a look at the RedMonk Programming Languages Rankings for a different perspective. RedMonk extracts language rankings from GitHub and Stack Overflow and combines them for a ranking that attempts to reflect both code (GitHub) and discussion (Stack Overflow) traction. Ruby ranks number 9 on this list.

The Ruby Labor Market - Salaries and Vacancies for Ruby Programmers

The current popularity of Ruby and its use in some of the world's largest and most impressive tech projects means that Ruby is an excellent choice for developers. But what can a Ruby developer expect to earn in 2022? And how easily will they find a job?

What Does a Ruby Developer Do?

Before we dive into the current labor market for Ruby, it's worth taking a quick detour to define precisely what a Ruby developer does. Of course, the exact nature of the job will vary between companies and industries, but most Ruby developers will conduct similar activities in their careers.

Ruby on Rails developer responsibilities include:

Salaries vary between locations and based on experience. However, by looking at data gathered from the top recruitment sites, we can better understand where Ruby developer salaries stand today. 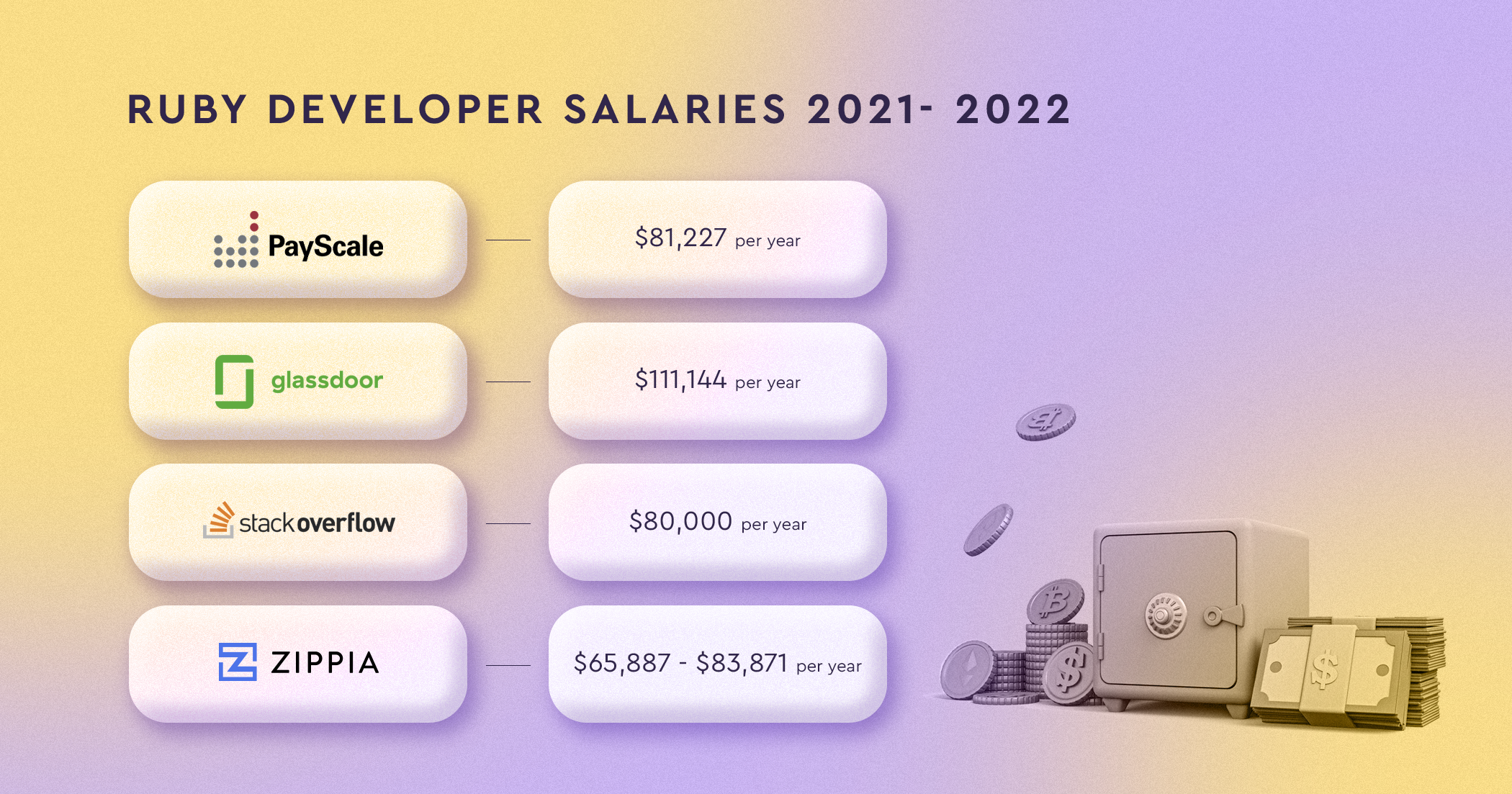 Job vacancies offer a look into the health of the current job market and how highly sought-after specific roles are to companies. For example, many vacancies mean that developers should find it easy to get a job and that companies are in desperate need of Ruby developers. The below figures were taken at the time of writing (April 2022). 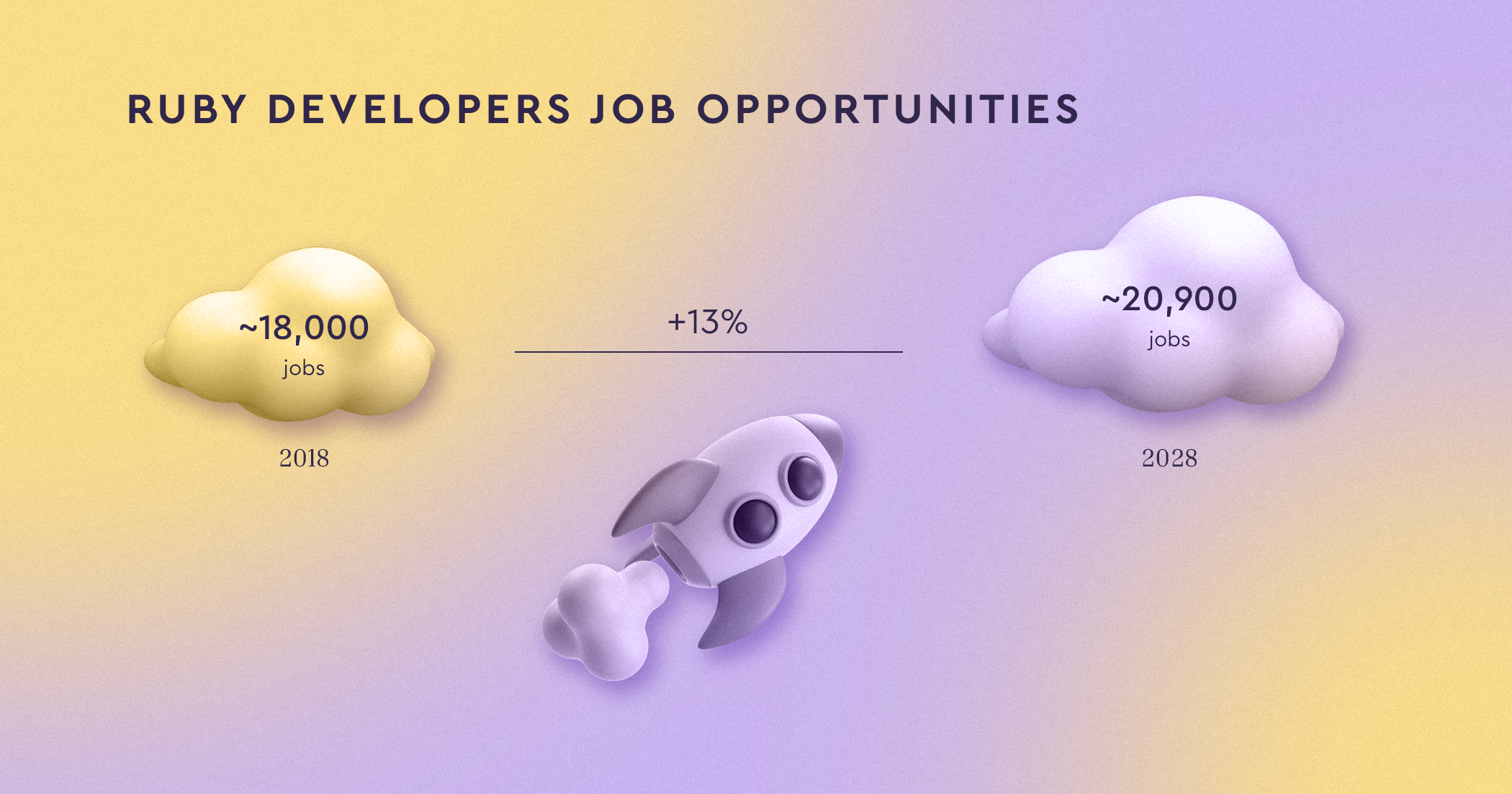 What Do Experienced Developers Think of Ruby?

We learned about the prospects of Ruby and the state of the language firsthand by asking experienced developers to answer a few questions. Here are their answers!

And that's a wrap! Now you know everything there is to know about the high-level unique scripting language Ruby! Get in touch today if you want to know how we can help you with your Ruby project.