Does Your Ecommerce Business Need a Progressive Web App?

In recent years, progressive web application (PWA) technology has skyrocketed in popularity. Part of the reason PWAs have become so widespread is down to the rising number of smartphone users. As of 2022, the number of smartphone users worldwide is an eye-watering $6.648 Billion, or 83.89% of the world's population. And as we progress further into the 2020s, this number will only continue to soar.

With mobile consumption on the rise, companies were forced to find innovative ways to engage with their audiences and offer increasingly interactive experiences. That's where PWAs come in. Today, PWA technology is used all over the web, including large-scale projects like Instagram, Twitter, Pinterest, Aviasales, and Starbucks.

With that in mind, let's discuss what PWA is, how it works, and its advantages and disadvantages. Lastly, we'll also dive into how businesses can leverage this technology to connect with their customers and why PWA is a powerful tool for eCommerce projects.

What Exactly Is a PWA? PWA Meaning and A Brief History

Progressive web apps (PWAs) are web applications or pages designed to behave (look and feel) like native mobile applications. For many years, native apps have been seen as the golden standard. Native apps run smoothly, have a cohesive look and feel, and are fast and secure. PWAs attempt to recreate the benefits of native apps. Compared to their often bloated hybrid app or conventional app cousins, they also represent a return to simplicity and lightweight operations.

Apple is at the root of PWA. Apple co-founder Steve Jobs first presented the concept to the world during the introduction of the iPhone back in 2007. Essentially, these early apps were supposed to run on the iPhone and Safari browser simultaneously and be cross-platform (they would also work on a macOS computer). And it was for this reason that the original iPhone didn't have an App Store (it was deemed unnecessary).

However, while the concept was promising, poor user experiences caused Apple to abandon the idea after just a year. They instead chose to focus on native utilities and the App Store. As a result, progressive web-based programs came to a halt. 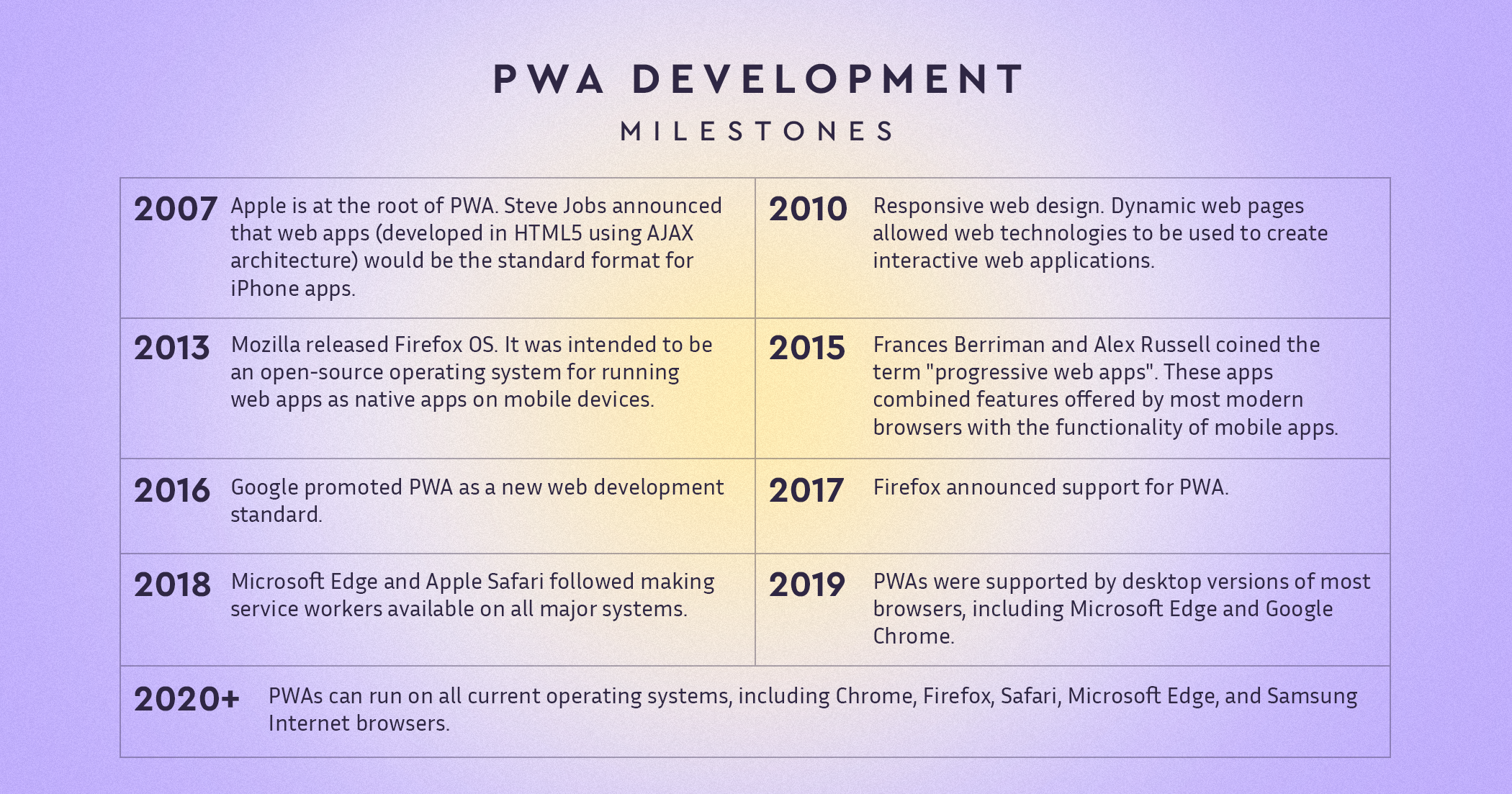 The technology returned with renewed power in 2015 with the expansion of Google's Chrome browser and the introduction of Service Worker and Web App Manifest. Then, in 2018, PWAs found their way to the Safari browser on both iOS and macOS, and Microsoft began promoting them through the Microsoft Store. Today, PWAs can run on all current operating systems, including Chrome, Firefox, Safari, Microsoft Edge, and Samsung Internet browsers.

PWAs promise to solve two problems at once. They offer improved performance and usability (vs. a traditional responsive mobile site), thus promise to have a big impact on mobile web conversion rates while also alleviating the need for merchants to invest in developing expensive native apps.
– Peter Sheldon, vice president of strategy at Magento Commerce.

A Snapshot of PWAs Today

With mobile devices dominating our attention, PWAs have risen to the challenge of providing new immersive, seamless, and interactive digital experiences. But how exactly are PWAs shaping the world today?

One study found that the financial value of the PWA market will reach a value of 10.77 billion dollars by 2027, representing annual growth of over 30% between now and then. In other words, not only are PWAs popular today, but they're not going anywhere in the future.

While developing good mobile experiences can be expensive and time-consuming, businesses can't afford not to do it. Statista estimates that 72.9% of all purchases worldwide were made through mobile gadgets in 2021 and even more by 2025.

One of the primary applications of PWA is in the ecommerce industry. Ecommerce sales hit a whopping $359.32 billion in the US in 2021, an increase of 15.2% over 2020. And this figure is expected to more than double by 2025. So as more people take to the web to find their next purchase, PWAs will further rise in prominence.

One of the significant barriers to entry for any emerging technology is accessibility and ease of implementation. Luckily, PWAs are becoming extremely accessible and convenient for both companies and developers. Companies spend fewer resources with PWAs because the front end and back end are separated, and search engines index the application site. Additionally, since PWAs are built using standard web technologies like JavaScript, HTML, CSS, and WebAssembly, they're accessible to developers.

According to Chrome web statistics, PWA-like page loads account for around 19% of the market share. This is no small number, and it's clear that PWAs will increasingly become a part of our everyday lives before long. In another positive development, Microsoft and Google have teamed up to make better PWAs for the Play Store.

What Makes a PWA? And How Do PWAs Work?

The benefit of PWA applications lies in their advantages over native utilities. Again, the core idea is in the name - they are progressive. They do not require a separate development for a specific operating system. And they are practically weightless (they don't take up memory space) and work faster than full-fledged applications. But what makes an app progressive?

To be progressive, an app must use specific technologies:

Developers use several well-liked technologies, most based on JavaScript, to craft PWAs, including:

PWAs offer a range of features and benefits over conventional websites and apps. For example, PWAs are known for their increased responsiveness, easy installation, ability to add to the home screen with ease, and convenient offline mode (they're connectivity independent). Other prominent features include: 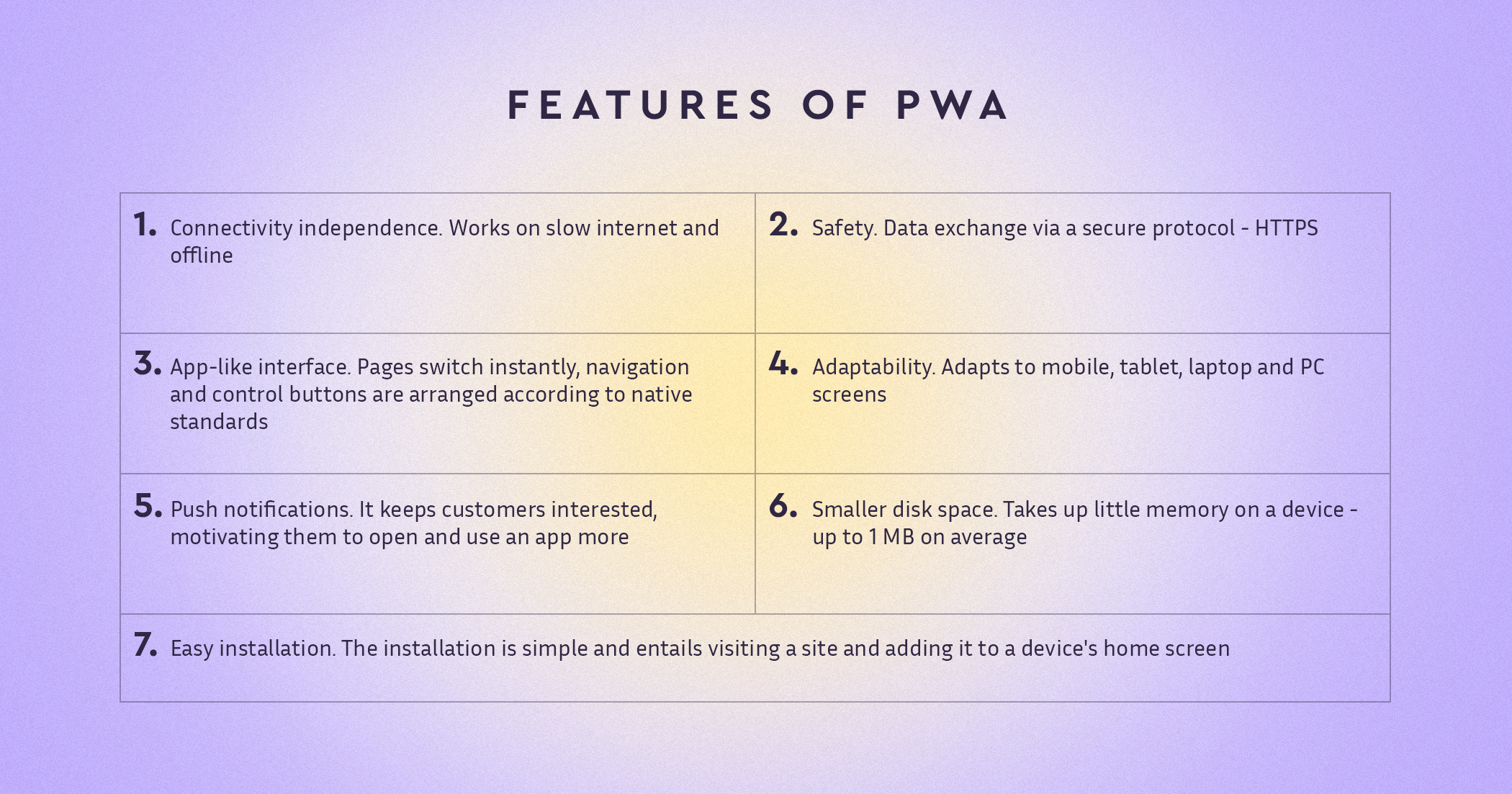 Benefits of PWA for Ecommerce Companies

Today, it's much more likely that a customer will interact with your website from a mobile or tablet rather than a desktop. In fact, 50% of smartphone users are more likely to use your website on a smartphone than download an app. With this in mind, eCommerce companies must strive to create an excellent smartphone shopping experience. Failing to do so can land you in trouble - research shows that 40% of users will go to a competitor if they have a bad mobile experience.

And the benefits don't stop there. Here are the top reasons eCommerce companies could implement PWA technology to gain a competitive edge:

Some prominent companies have achieved these benefits by implementing PWAs for their mobile customers. For example, when Lyft experimented to determine the impact of their PWA technology, they found that users take 14% more rides than due to PWA. Leading UK clothing retailer George (part of the ASDA/Walmart group) also found that their PWA results in 20% more page views per visit, 2X lower bounce rate, a 31% increase in conversion rate, and more.

For example, Apple currently doesn't allow push notifications with PWAs on iOS. It's a shame that a company so fundamental to the invention of the progressive web app is now creating obstacles that limit its success. This might change in the future. There's even a change.org petition to kick Apple into action.

Another thing to consider is that PWAs are browser-dependent, which means they work excellently on the latest versions of browsers but not so well on outdated versions. As a result, consumers using old browsers might experience intermittent performance and a poorer customer experience.
Lastly, progressive web apps aren't capable of performing SIM card actions. For example, there is no TouchID support, and there are restrictions on Bluetooth operation. This isn't likely to be a massive issue for most eCommerce companies, but it's something to be aware of.

If you have doubts about which technology is right for you or whether a progressive web app would be a good choice for your company, contact us for a detailed consultation. Active Bridge has more than ten years of experience with web systems, native applications, and PWAs development.

Read more to learn about language spam and how to stop itHow to increase CTR? Google Rich SnippetsWhat do you know about digital marketing strategy?